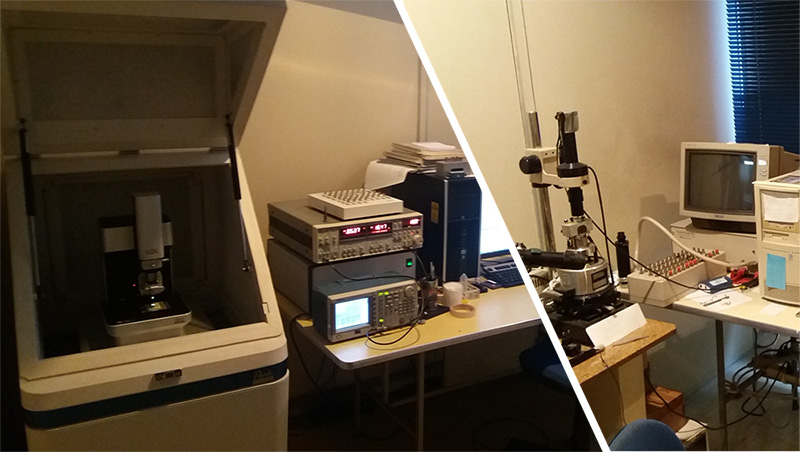 The Nanoscopy Lab acts on the characterization of nanoscale tribological and mechanical properties of various materials such as thin films, semiconductor crystals and nanostructures, cellulose fibers and rocks.

The laboratory has been working in the training of highly qualified personnel. Throughout its years of activity, it has contributed to the accomplishment of several graduate thesis from different departments of PUC-Rio, Universities in Brazil (USP, UFSC and UFAP), and abroad (Arizona State university), as well as in the supervision of graduate students of the Department of Physics. The lab. now has more than 60 publications in international journals, cited more than 1000 times and with about 2,500 downloads and views, which give the laboratory significant international visibility. The research work carried out in the laboratory allowed the establishment of national (Inmetro and UFFS) and international (Arizona State University) long term partnerships as well as partnerships with companies such as PETROBRAS.

The Nanoscopy Lab began its activities in mid-1998, as initiative of Prof. Fernando Lázaro Freire Jr., with the acquisition and installation of the first atomic force microscope (AFM) in PUC-Rio. Initially focused on the tribological characterization of thin carbon films used as protective coatings, working in collaboration with the Protective Coatings Laboratory, the Nanoscopy Lab has expanded its area of interest over time. Today, the techniques of microscopy developed in the lab are applied in the characterization of several materials. The lab develops novel AFM methodologies, modes of operation and nanolithography techniques using the AFM as a basic tool.

The Nanoscopy laboratory is in the 4º floor of the Pe. Xavier Roser building, also known as the van de Graaff accelerator building.