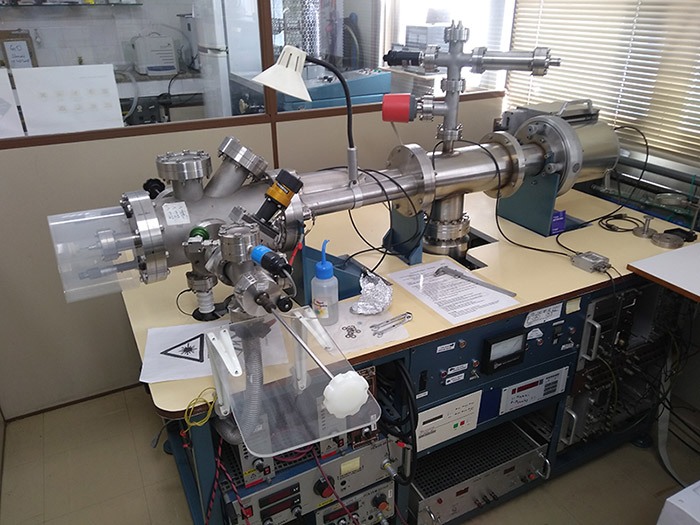 The activities carried out in the LEMM range from basic research (theoretical and experimental) to applied research (mass spectrometry and its instrumentation). These tasks are interdisciplinary, involving not only students and researchers in Physics, but also those of Chemistry, Biochemistry, Astrophysics and Engineering.

i) Ion desorption mechanisms induced by ion beams delivered by the 4 MV Van de   Graaff accelerator, by 252Cf fission fragments or by electron beam from 50 to 1000 eV.

ii) Radiolysis and chemical reactions induced by the ionizing radiations above mentioned.

In applied research, the emphasis is on:

A relevant feature of the Laboratory is to conduct frontier research with instrumentation built at the University and with the participation of students. Academic training in the area of ​​specialized scientific instrumentation is another the central objective of the LEMM. A consequence of the scientific investigation with non-commercial instruments is the generation of scientific data in particular conditions, using research niches among the traditional lines.

Initially constituted by one of the Van de Graaff accelerator lines, a time-of-flight mass spectrometer (TOF) was added in which the ionizing agent is an ion beam (fission fragments, tens of MeV) produced by a radioactive source of 252Cf. This spectrometer, designed and built as a PADCT project, is versatile and can receive as ultraviolet radiation or keV electron and ion guns ionizing sources.

– Time-of-flight mass spectrometer, manufactured in the laboratory, equipped with an electrostatic ion mirror with two stages (Reflectron type), which can be operated in linear and reflected modes. The sample can be cooled down to 10 K by means of a liquid He cryostat.

The LEMM is located in the 4th. floor of the Van de Graaff Accelerator Laboratory (Father Roser Building.)