The Laboratory conducts research in the area of Instrumentation new magnetic sensors for the purpose of measuring magnetic fields generated by a wide range of materials: from magnetic nanoparticles linked to biological agents, magnetic minerals present in terrestrial and extraterrestrial rocks up containing metal parts and cracks Corrosion forming part of the infrastructure of various industries. We develop instruments based on superconducting SQUID sensors, sensors based on the properties of giant magnetoresistance and tunnel (GMR, TMR), giant magnetostrictive (GMM) and giant magnetoimpedance (GMI). We also develop magnetic sensors with optical fiber Bragg gratings. The instrumentation available in the laboratory enables us to measure magnetic fields femtotesla from 100 to 3 Tesla. By measuring these magnetic fields, we study how to obtain quantitative information about the source that generated them, for example, the mass of biological agents attached to the nanoparticles and the geometry of the crack or corrosion of metal parts damaged.

Relevance / Impact:
We have developed an instrumentation not available in the country and seek to carry out various types of magnetic biological assays for the detection and characterization of diseases at early stages, which could have a major impact on the early diagnosis of various diseases. Moreover in the industry, the significant increase in steel containing infrastructure to meet energy needs Brazilian brings an increased risk of accidents. The development of this instrumentation can make an important contribution to reducing this risk and the preservation of the environment.

Brief history:
The Laboratory of Magnetic Nondestructive Testing began its activities in the early 90s, after stages of their post doctoral coordinator in the Department of Physics at New York University and the Department of Physics and Astronomy at Vanderbilt University in the U.S. either. The Laboratory is part of the World Federation of Nondestructive Evaluation Centers, USA. The Laboratory has several patents in Brazil and abroad and has developed partnerships with companies including Eletrobras, Petrobras and Transpetro. 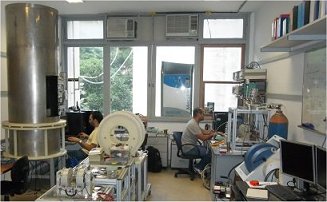