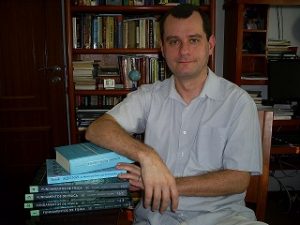 Graduated (1994) in Physics and obtained his Masters Degree (1996) both at Puc-Rio, then did his PhD (2000) at CBPF (Brazilian Center for Physical Research) in the area of Quantum Field Theory, working in the Casimir Effect and in Quantum Field Theory at Curved Spacetimes. As a young Doctor, spent one year at the Theoretical Physics Group at the Federal University of Itajubá (Unifei). As his interest in the philosophical fundaments of physical theories and concepts grew, he withdrawed from research in the University to dedicate himself to autonomous study with the aim of better understanding what Physics is all about. Since then, teached eight years in High School and presently (since 2010) teaches at the Physics Department at Puc-Rio.