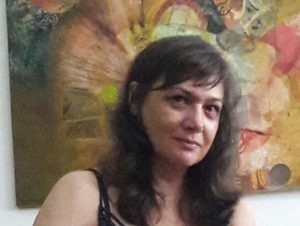 Celia Anteneodo is Professor of Physics at PUC-Rio since 2004. She has experience in statistical and nonlinear physics. Her current research lines include stochastic dynamics, nonlinear dynamics, and emergent collective properties of complex systems (for more information click here).

She received BSc degree in Physics from the University of Buenos Aires, Argentina (1986), and PhD in Physics from the Brazilian Center for Physics Research (CBPF, 1993), where she worked in experimental biophysics, having done part of her thesis at the University of Waterloo, Canada.Later she conducted postdoctoral research in nonlinear and statistical physics at CBPF and at the Biophysics Institute of the Federal University of Rio de Janeiro (UFRJ-IBCCF), where she was visiting professor from 1997 to 2001.She has also been patent examiner at the Brazilian bureau INPI (2007).